My first ever blog post and it’s got absolutely nothing to do with the reason this website was created, a solo trans Atlantic row in December. Fear not there’ll be plenty to come about that epic challenge and its many facets of preparation shortly. For now you’ll have to be content with a ride on the World’s longest train in the relatively unknown country of Mauritania. 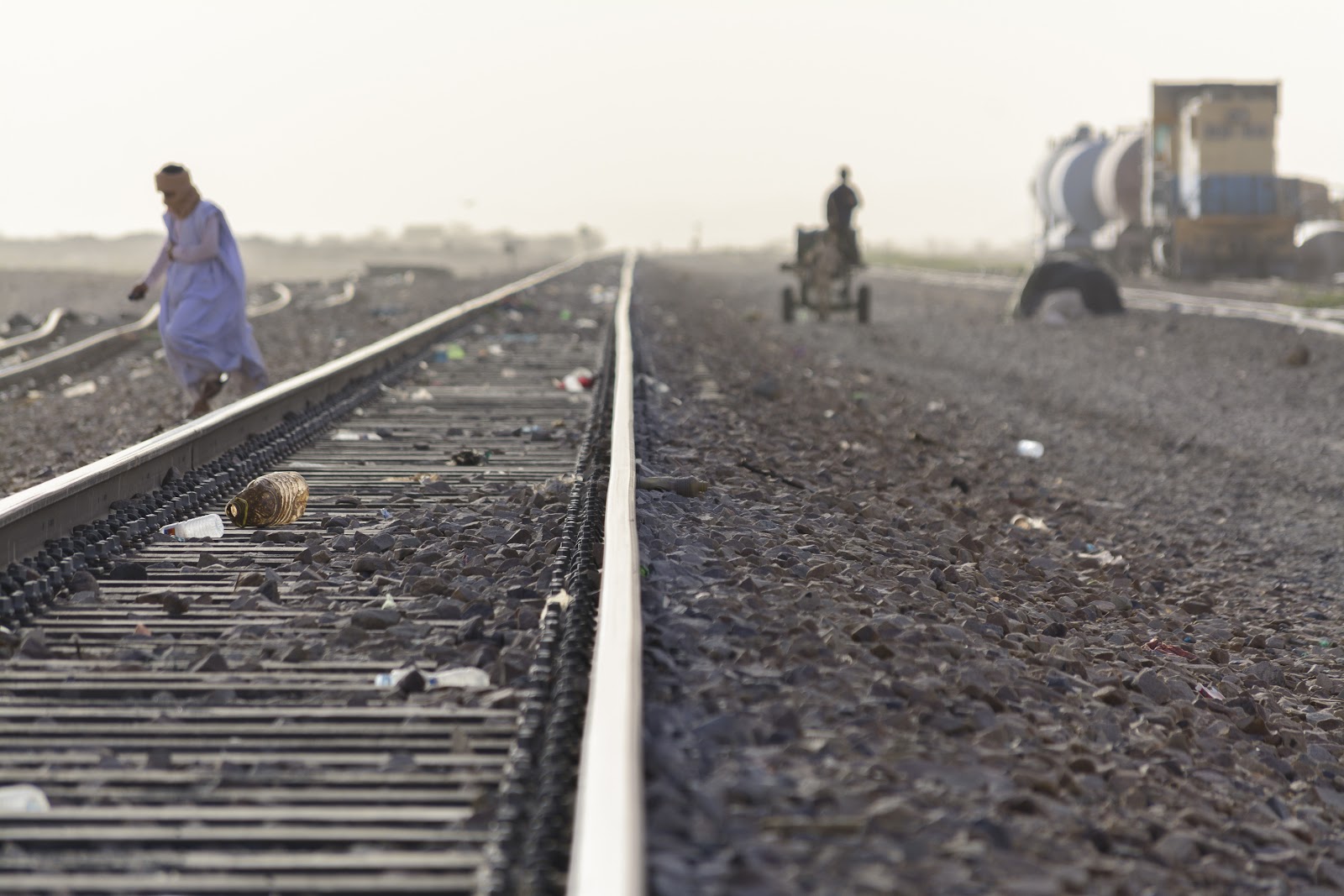 For me adventure comes in many different forms, a good one will stimulate you physically, mentally and emotionally, however they can’t all be, nor would we want them to be, epic feats of human endurance. I find adventure in a Velib spin into unknown parts of Paris or rising early to get a sunrise shot in the mountains of Connemara. My latest quest for adventure took me to the vast expanse of sand also known as Mauritania in Northwest Africa. Most people have no clue it even exists and even if they did have no intention of actually setting foot in it, it’s not exactly making any Lonely Planet Top 10 lists.  But I knew for a long time I’d visit and for one reason in particular, to ride the World’s longest train, also known as ‘The Iron Ore Train’.

Like Ronseal, the Iron Ore Train does exactly what it says on the tin, transports iron ore from the mines in Zouérat to Mauritania’s second biggest city and commercial centre Nouadihbou. What makes is notable apart from its obvious length is that although a cargo train it is used by the locals, or anyone for that matter, to travel on, transports goods, livestock, cars, basically anything they can get on it. 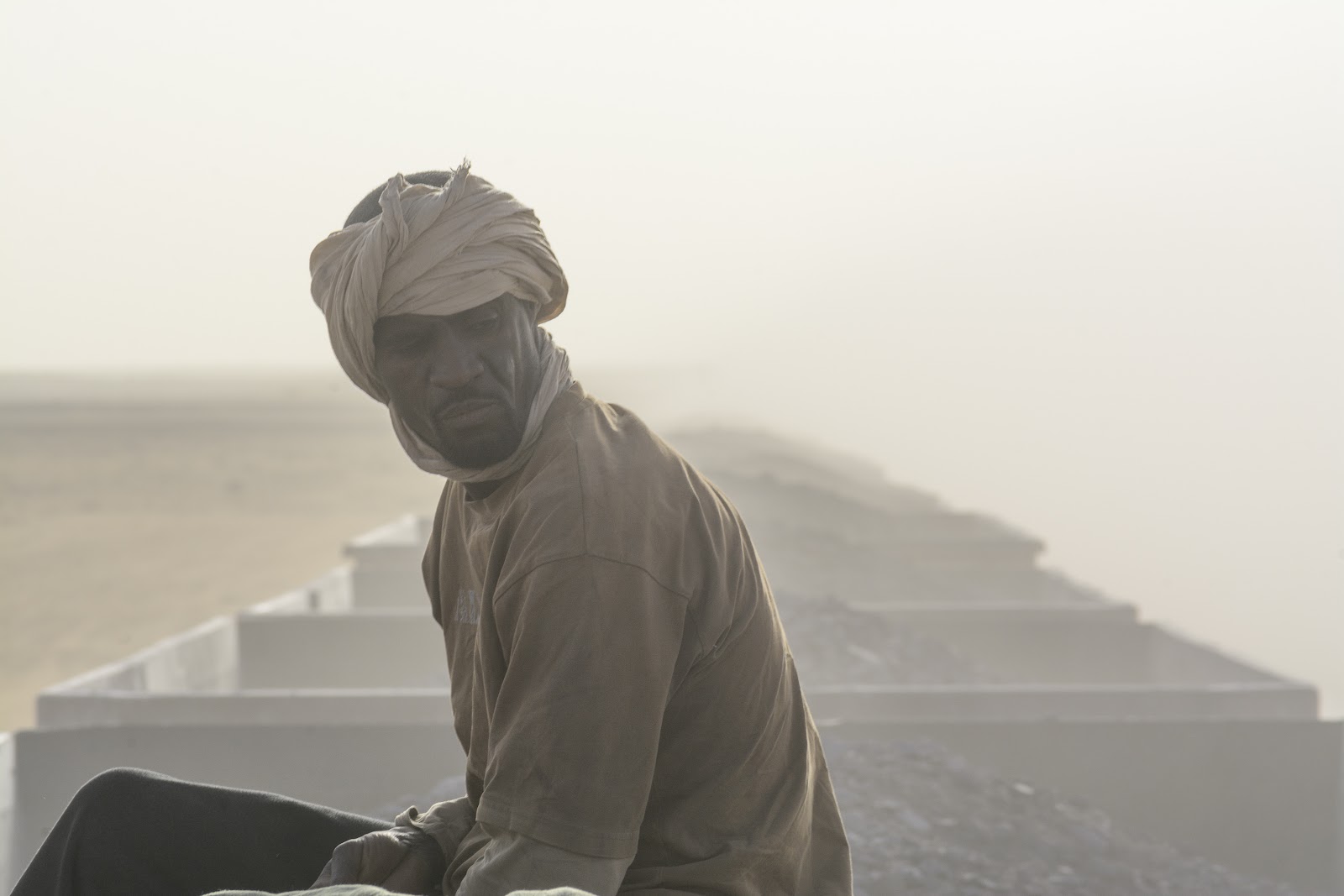 As a traveler or transportee you have two options, you can hop on board, for a small fee, the one overcrowded passenger carriage at the end of the train and spend 12 hours with someone’s toes in your nostrils or you can get your own nostrils filled, among other orifices, with dust, sand, grit and more by riding on top of the ore in the containers. That privilege you’ll be happy to note is free. Such unique travel experiences are difficult to find in this day and age, also this one certainly isn’t easy to get to and definitely isn’t in any way comfortable, making it a perfect undertaking for what I want from my travels.

So the train runs daily 700km or so between Zouérat and Nouadihbou, with one short stop in a small town called Choum, around halfway along what is Mauritania’s only railway line. Choum is where most people, including myself, climb aboard, literally. Getting there in itself is a trial, but should not be a problem with a little persistence. After a refreshing couple of nights Couchsurfing in Mauritania’s capital Nouackchott I took a shared taxi to Atar. It’s 7 in cab in Mauritania including the driver, but I was having none of that for 8 hours driving through the Sahel in 40 degree heat so bought the ‘2 places’ of the front passenger seat for 10000 Ouguiya or 25euro. Money well spent and honestly a pleasant experience as far as shared African taxis go. 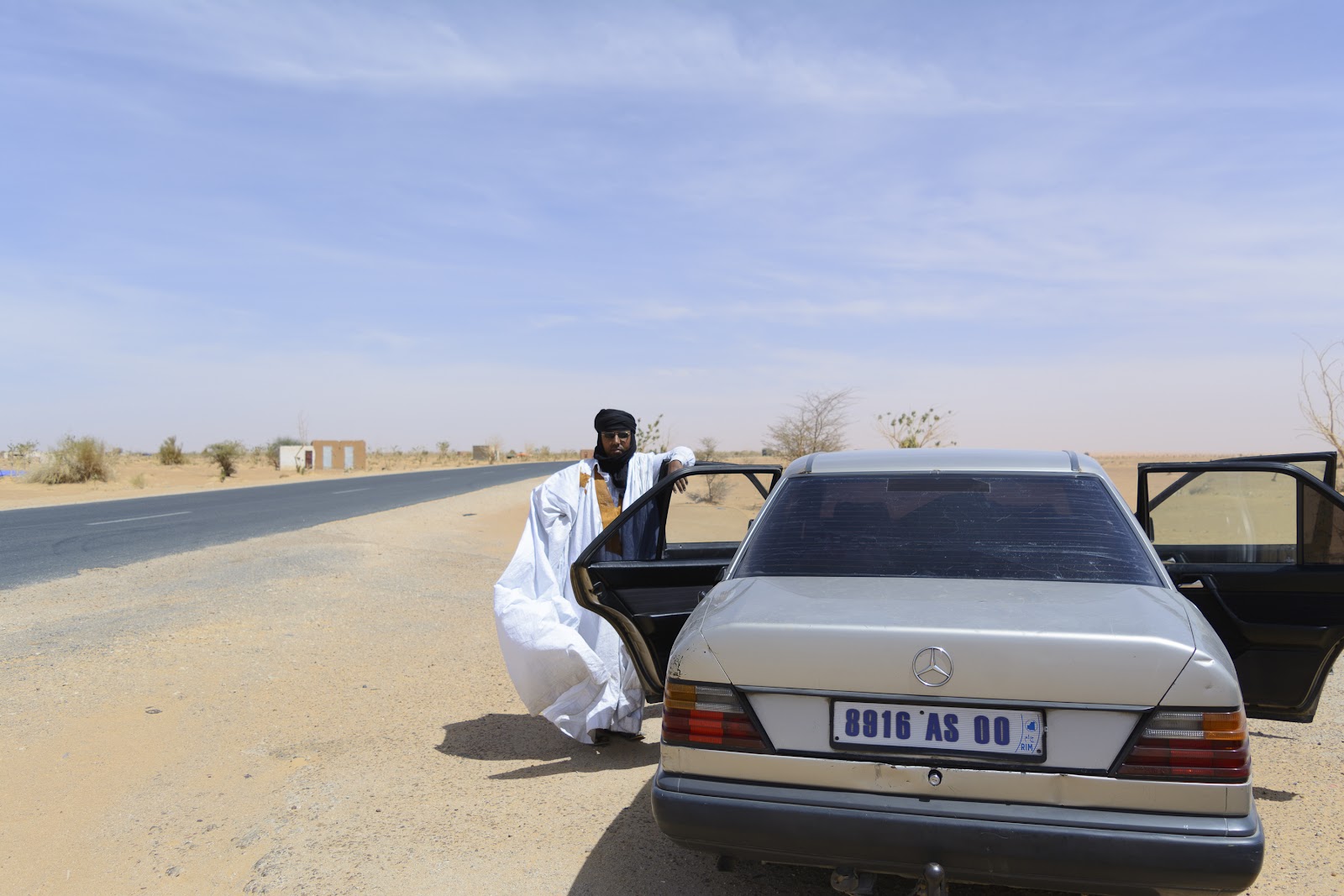 The friendly driver (pic above) spoke French and in a act of compassion literally fed me salted mutton and baguette on our lunch stop after seeing me trying to fold my stiff rugby battered frame into the standard seating position on the floor around the communal plate. He also had the endearing quality of breaking the silence while driving at irregular intervals with a melodic chant in Arabic, which I presumed was a religious blessing of sort. It was strangely comforting and never ceased to make me smile. After numerous knee-pain relieving prayer stops we

arrived in Atar and with the help of the driver found an auberge for the night for around 15 euro. 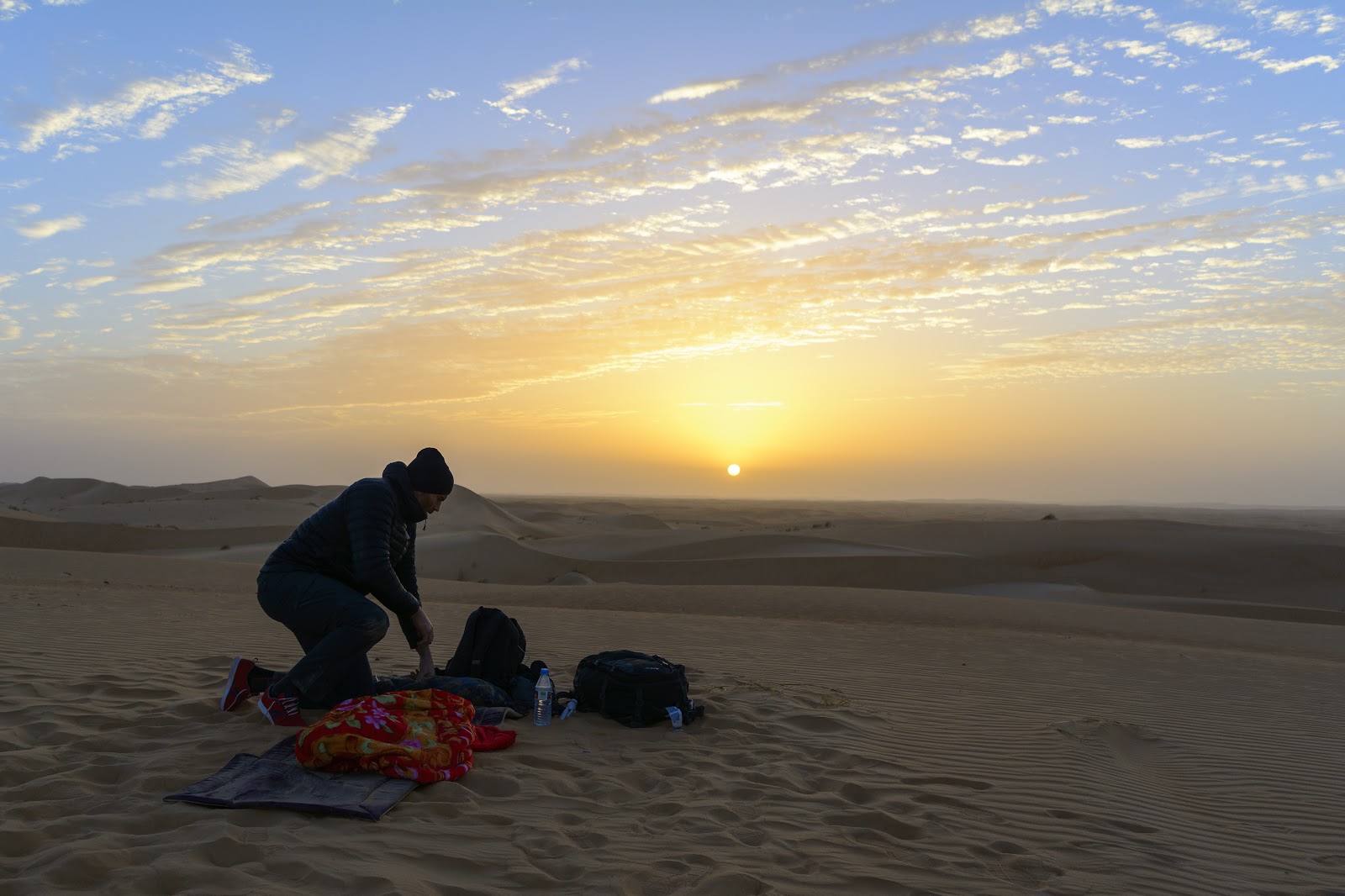 That was to prove my last night with a roof over my head for 4 days as I traveled further East into the Sahara, visiting the ancient towns of Oudane and Chingetti, sleeping on the roof of a auberge to avoid mosquitos and under the starry sky again this time surrounded by majestic dunes of the Sahara. And as quick as I had left I was back in Atar ready for the meat of the trip and searching for a space in a taxi to bring me to Choum. It wasn’t looking to good until next thing I know I’m holding on for my life along with 4 others on the back of a Hilux truck while our driver obviously forgetting our presence did his best Colin McRae impression. 90 minutes later, with my Irish skin suitable crisp from the midday desert sun I was unloaded in the dust bowl town of Choum. There’s really nothing to the place apart from the tracks that split the place in two and a conglomeration of ground story building and mud huts and I had 7 hours to kill, or so I thought. 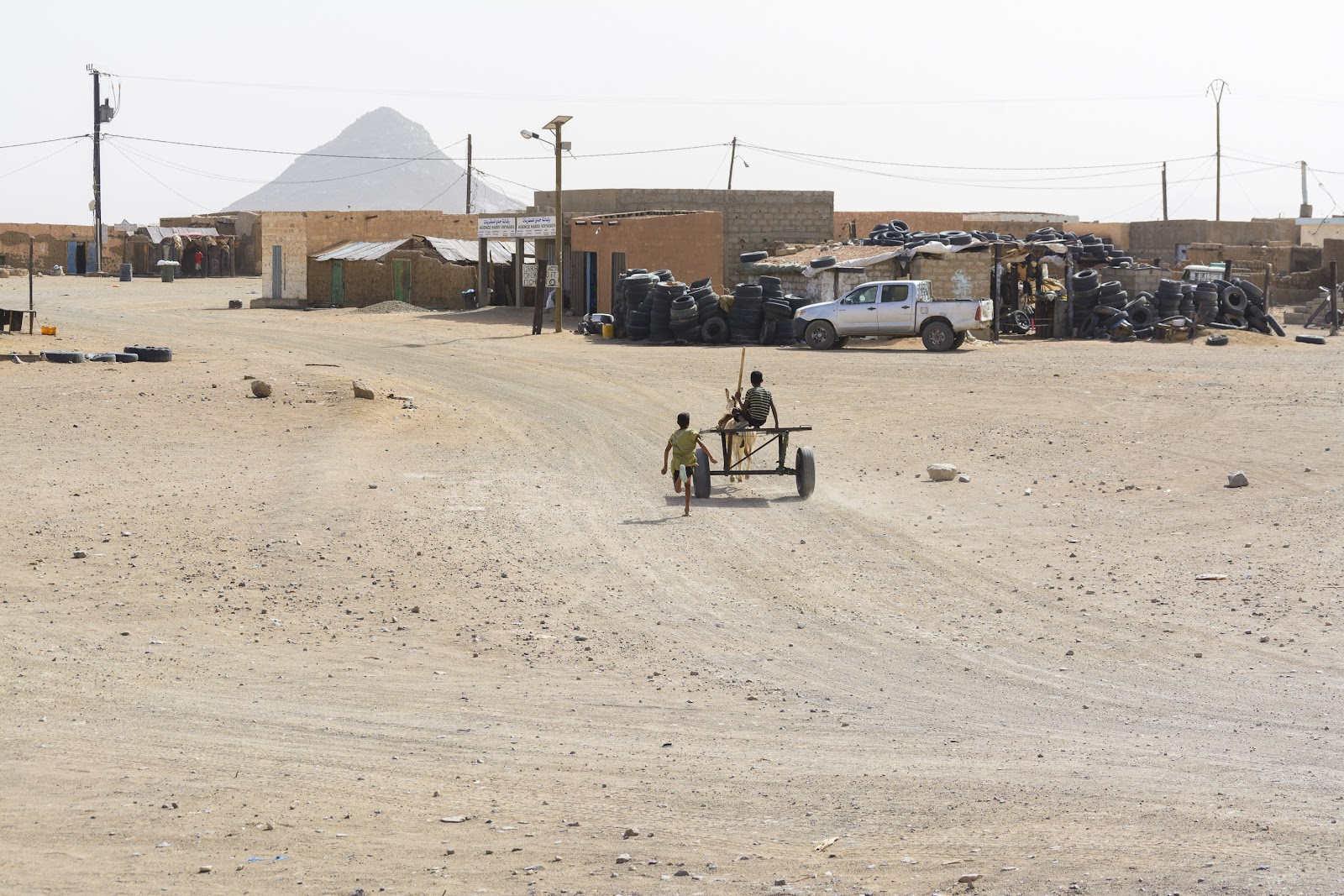 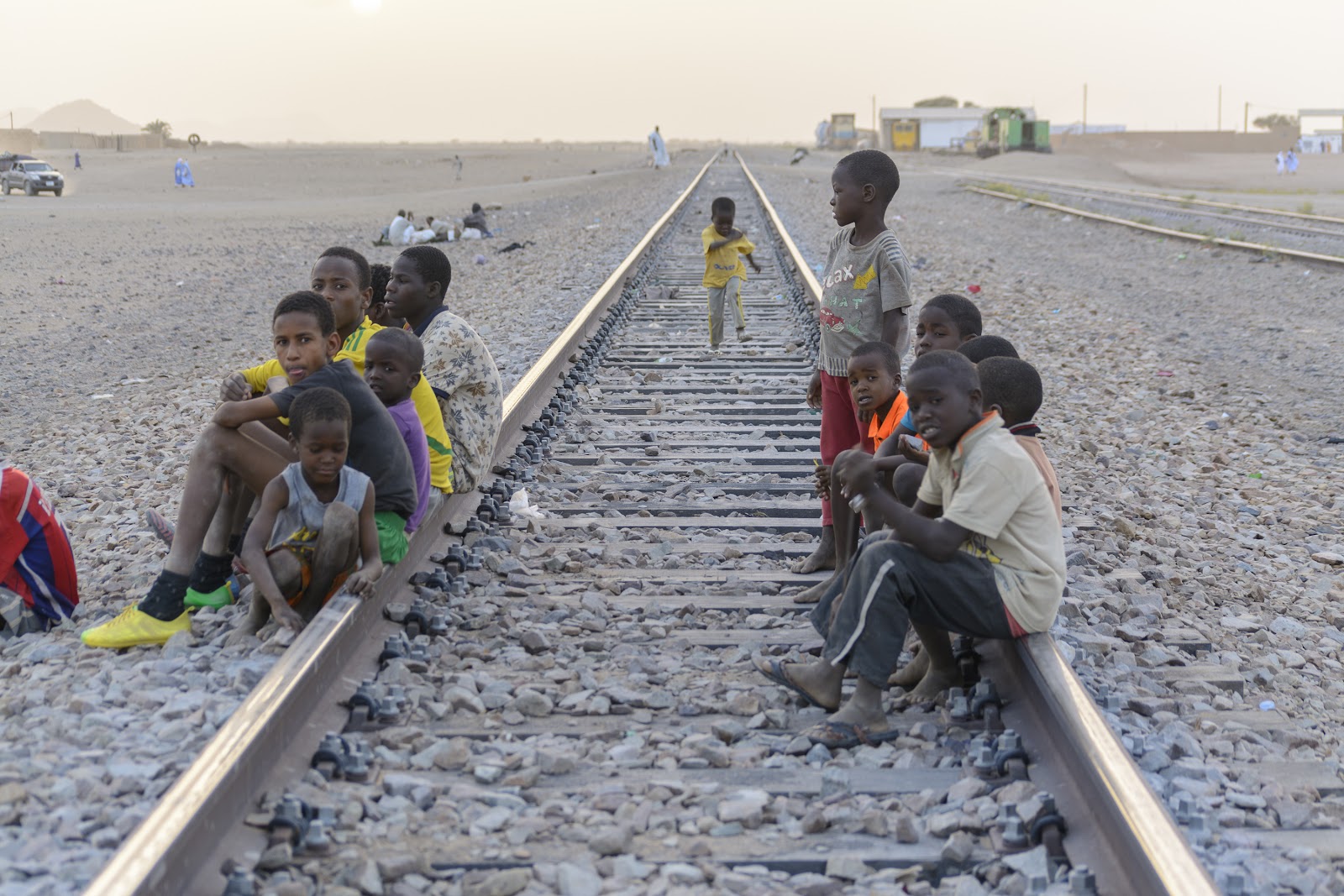 I settled into the local ‘Agence de Voyage’, basically a dark, dirty, fly filled tea room with some carpets for prayers and dozing on for the 7 hours and a very grateful opportunity to charge some camera batteries. Once you’ve seen food storage and preparation standards in Mauritania the question of eating often triggers conflicting internal responses, but when you’re hungry enough you’ll eat basically anything so I accepted the offer of lunch, the fact he said ‘deux plats?’ left me with a sense of curious anticipation. To my surprise the meal of fish and rice turned out to be the best I had in Mauritania, a huge bowl to fill a weary traveler's belly and refocus him on the journey ahead. 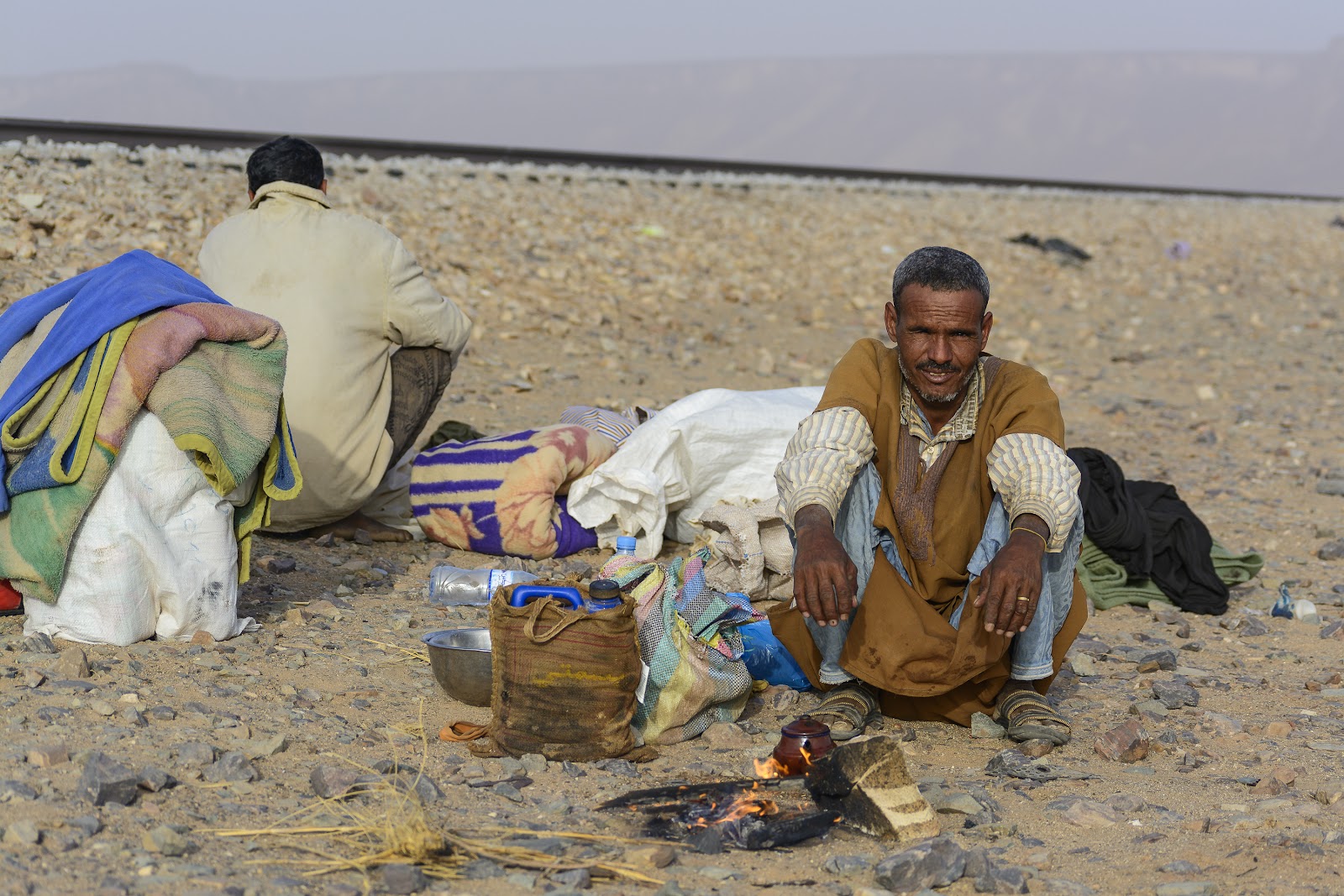 A rumour started circulating that the train would be late after the obligatory afternoon siesta and it soon evolved to the story that two trains would pass through town, one at 7pm and one at between 11pm and midnight. I read a few blog posts about the train ride and never heard anything about 2 trains in one day so was taking no chances and moved myself and my full belly and batteries to the side of the track, this would also give me the opportunity to chat with my fellow passengers, take some shots for my photo reportage and see how ill prepared I really was with the journey’s veterans. 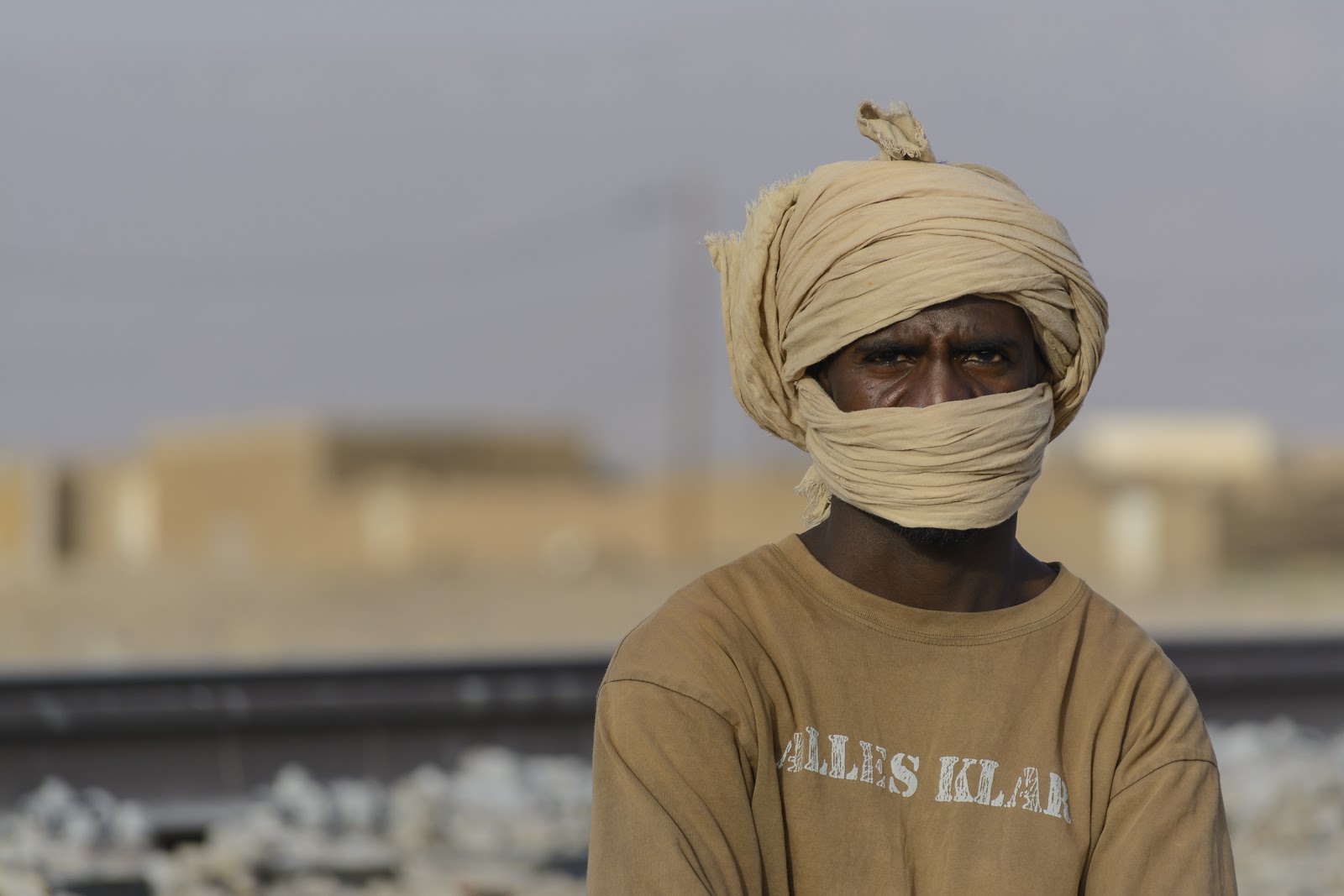 Nobody seemed to know exactly what was going on with the train, or everyone had a different answer so there was nothing for it but to wait and see. There was two distinct groups of men about 100 metres apart so I decided to place myself in the middle of them giving myself the best chance of being able to photograph both groups. I explained my photojournalism project to one of the elders (in the picture below making tea) and he was very persuasive with the, shall we say, photo shy members of his group.  He seemed to hold a lot of sway and I was very happy to have him in my corner. 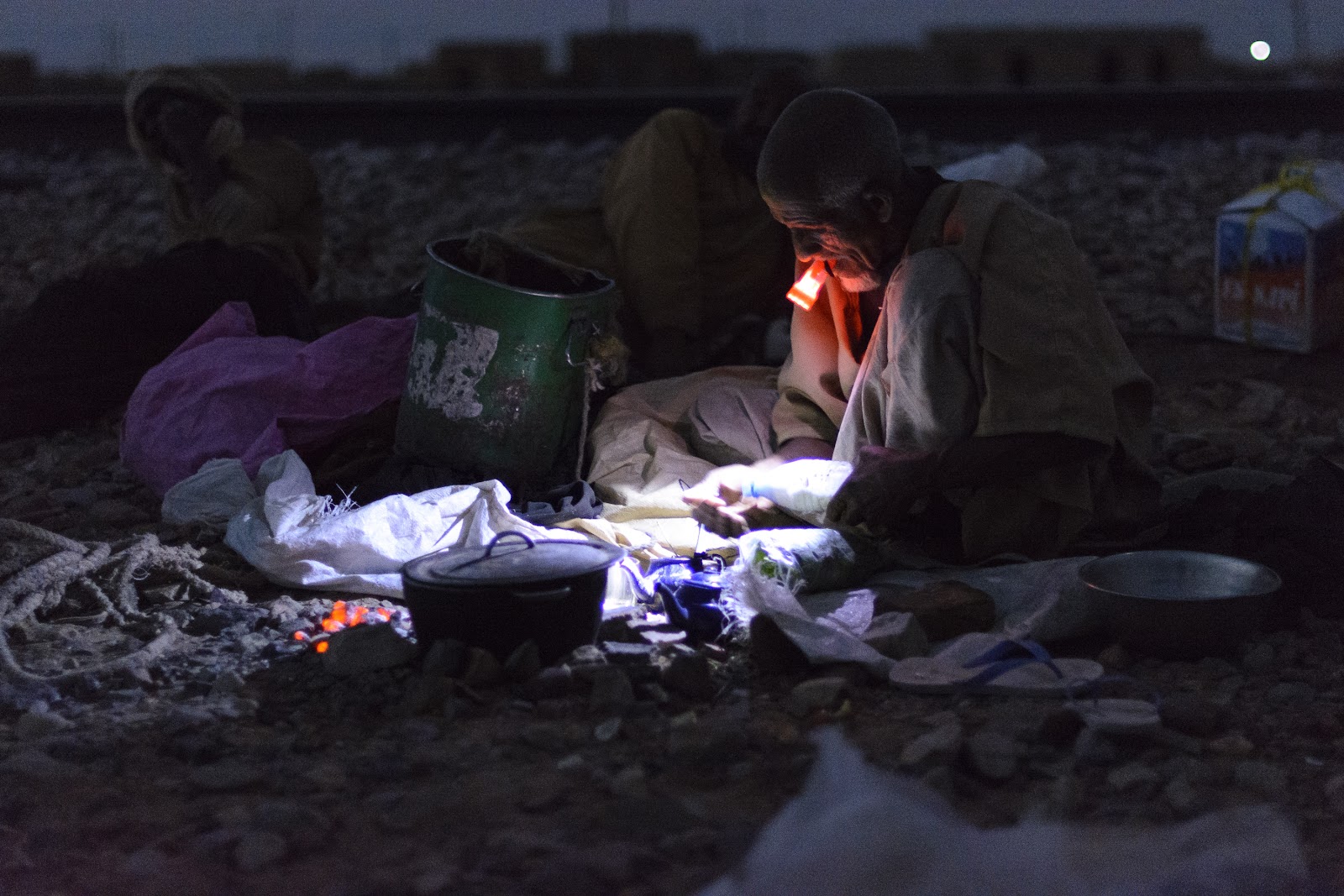 The hours ticked by and I demolished all snacks including unstoppably the next morning’s breakfast as the air was filled with the smell of my new neighbours cooking up an impressive feast trackside. Bang on 7pm the first train came impressively thundering through the middle of the habituated town, momentarily disturbing the calm cooling dusk and it was back to waiting. The next few hours were slow with nothing much but the odd local kid curiosity and playing with my newly bought flash to kill the time.

12 and half hours after landing in Choum the reason I’d come to Mauritania rolled to a screeching stop, all 2 kilometers and god knows how many tonnes of it. I climbed aboard immediately thinking it would take off again momentarily and attempted some shots in the pitch black, never ideal conditions for photography! In fact it turned out to be quite a leisurely pitstop before 30 minutes later they released the brakes to a savage domino effect which nearly catapulted this contented Irishman over the side of the train before the journey had even begun. Quickly regaining my composure and integrating a valuable lesson, we were off. Copying my old friend in the container just behind mine, I wedged my bedding between the 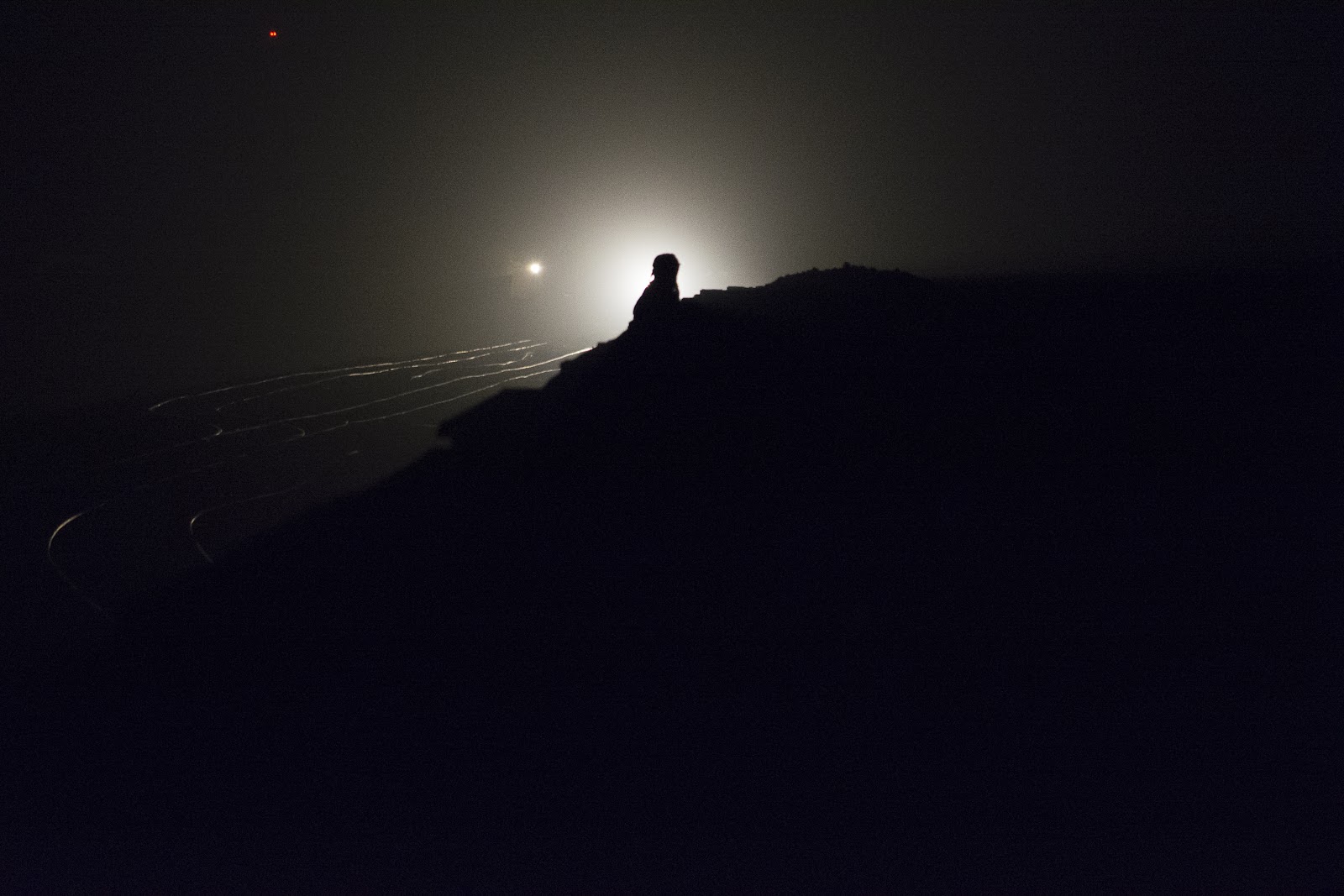 coal and the side the container, trying in vain to flatten out a spot that would be semi comfortable. There wasn’t much else to the first hour but that self satisfied smile and feeling of fulfillment of finally doing something that you’ve dreamed about doing for a long time.

As the clock ticked into the small hours, temperatures rapidly dropping, zero visibility and 12 hours of travel ahead it was time to put the head down and try to get warm and comfortable. Considering the circumstances, the night couldn’t have passed much better and I woke just as the sun was about to rise onto the expanding Mauritanian sands. 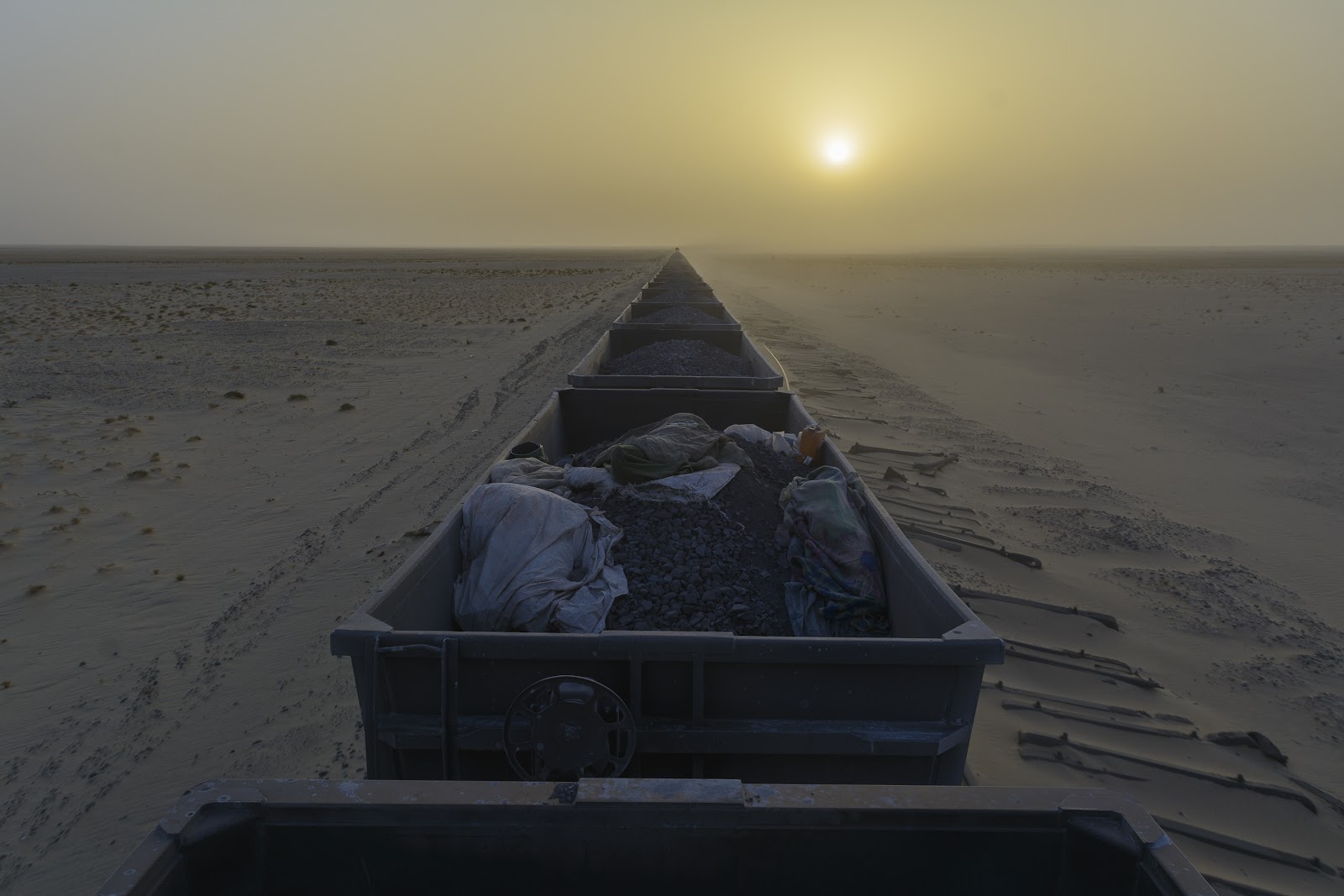 The next 5 or 6 hours will live long in my memory as the train snaked it’s way through the seemingly never ending Saharan desert, the sun rose breathing heat into the day, we passed jebels, dunes, oueds, wild herds of camels, and remote settlements, the dust flew everywhere, my 3 Mauritanian neighbours continued their rituals of praying, cooking and sharing cup after cup of tea. We even took an unexpected stop at one stage and a couple of guys unloaded their belongings like it was planned, perhaps Choum isn’t the only stop these days. Another commuter who must have been on board since Zouérat and who I’d seen signaling at me through my telephoto lens earlier, took this opportunity of a stop to make his way to my container and berate me for taking his photo. After a quick discussion on if I had the right to,  he was quickly sent packing by my 3 neighbours who all seemed to be fighting my case now despite earlier reservations 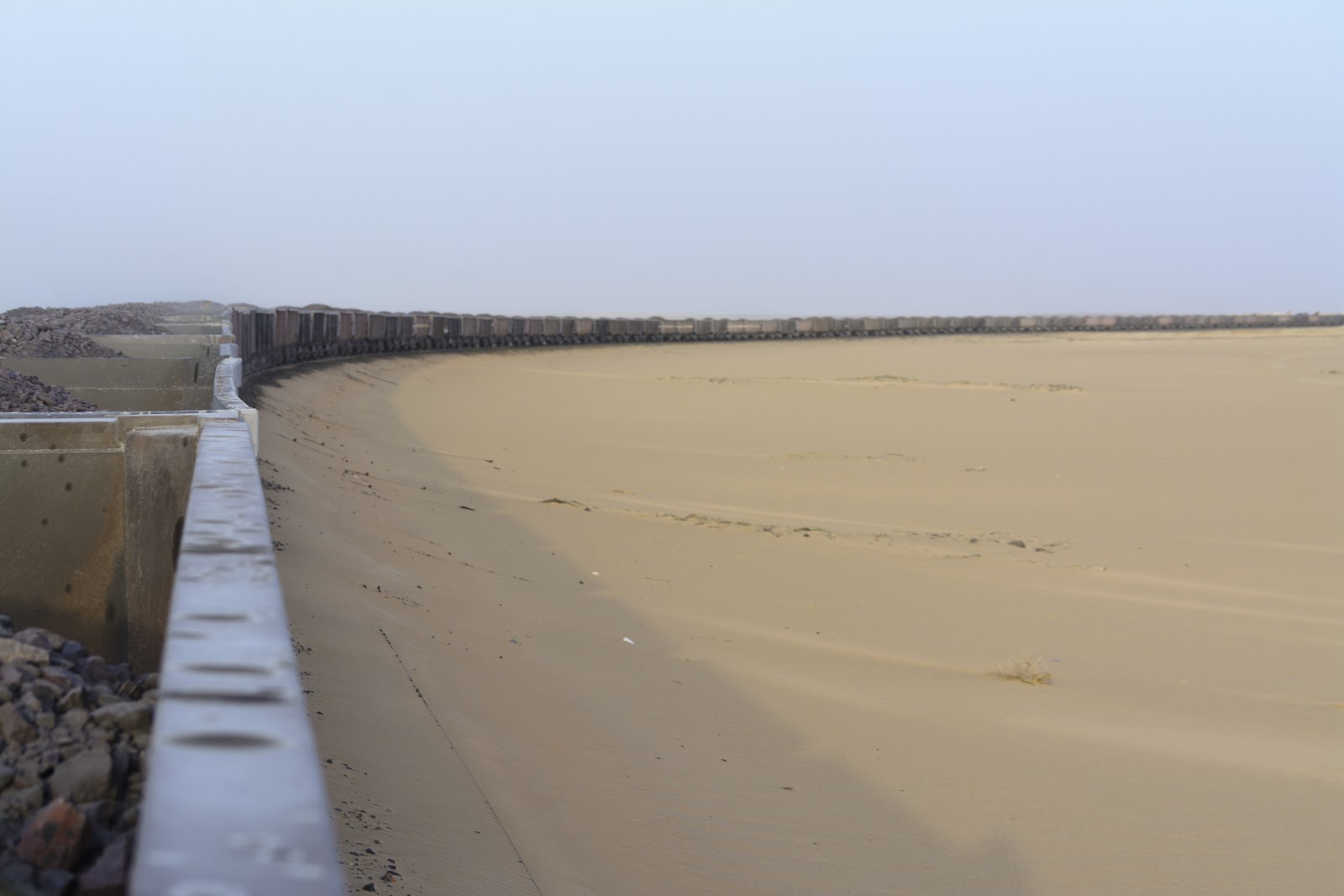 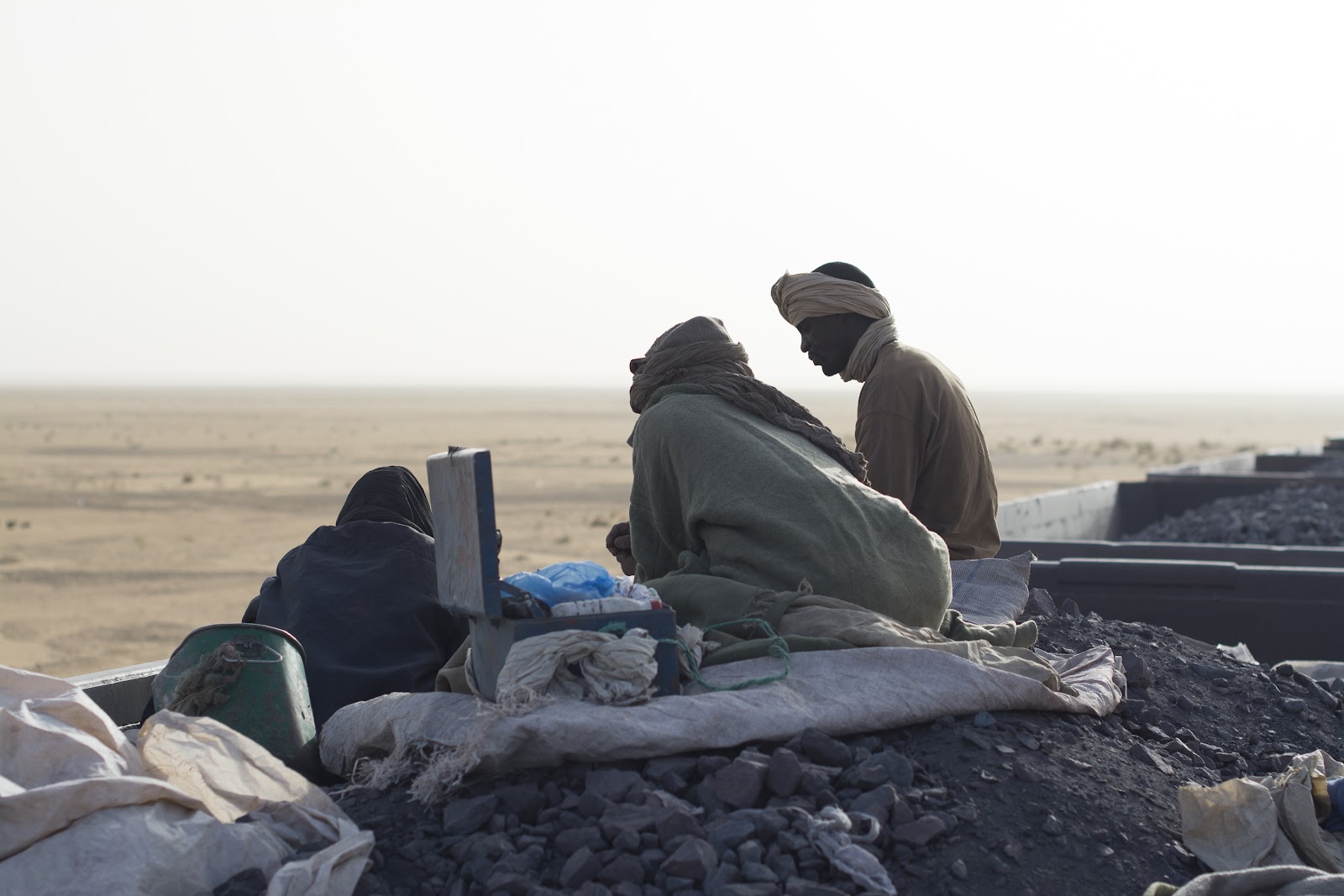 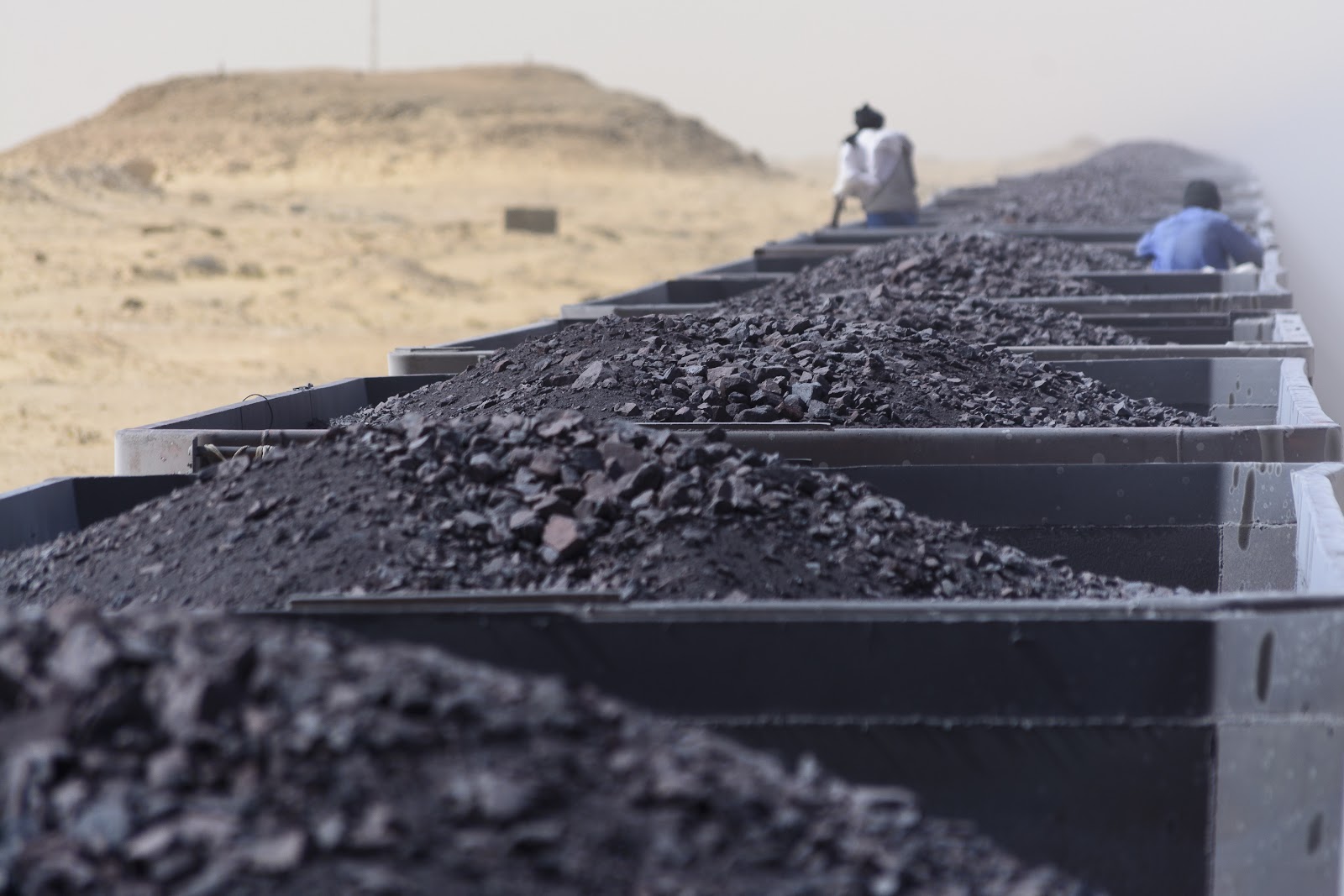 After 3 nights of sleeping under the stars not to mention the last 12 hours riding a noisy dust cloud through the Sahara it was time for as much comfort as Nouadibhou could muster. My expectations weren’t exactly Four Seasons-esque just something clean, preferably with a roof, shower and if lucky some wifi. Assuming we’d pull into the outskirts of the city and alight, it was quite the surprise when we pulled to a stop in the middle of nowhere and my neighbours shouted that this was where passengers get off before the train goes to the SNIM depot on the tip of Cap Blanc at the end of the peninsula. 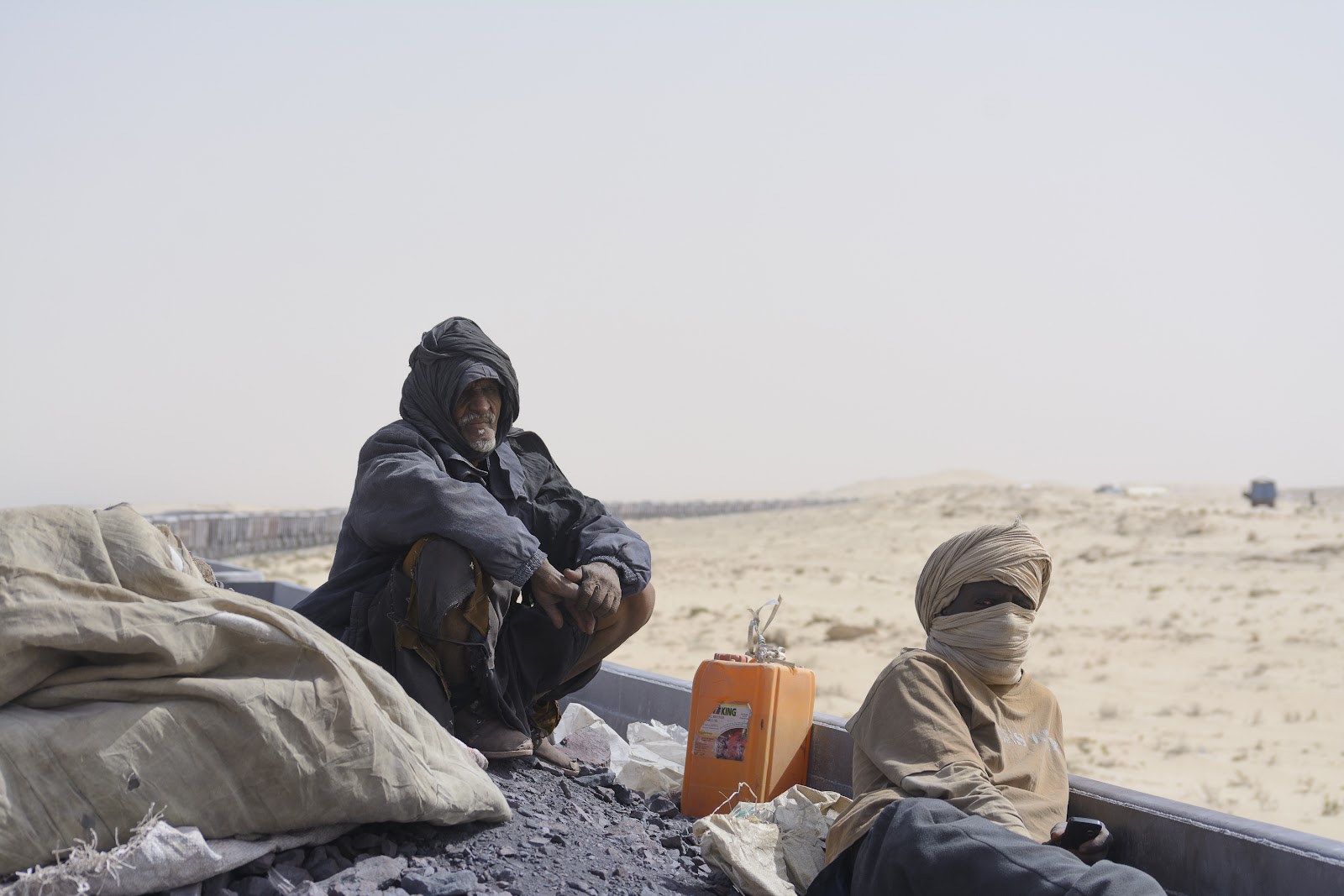 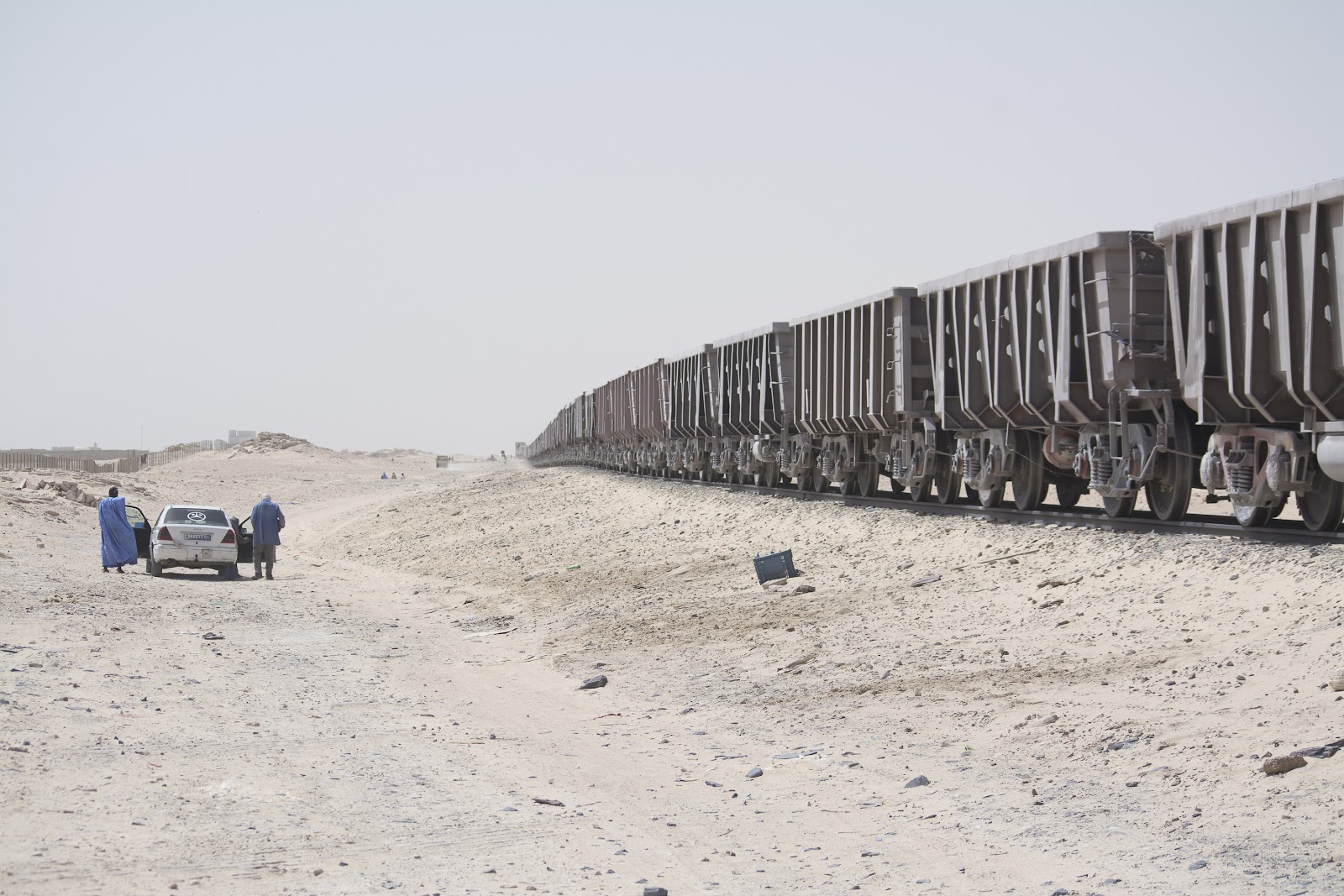 Cue a hail of dust as a cavalcade of old battered ‘taxis’ descended along the 2km of train to gather up the weary travelers, led by a friendly patrol of Gendarmeries checking passports and travel fiches. I said goodbye to my 3 neighbours, donating my blanket and mattress in the process, hopped into the waiting shell of a old Mercedes and closed the book on this unique adventure. 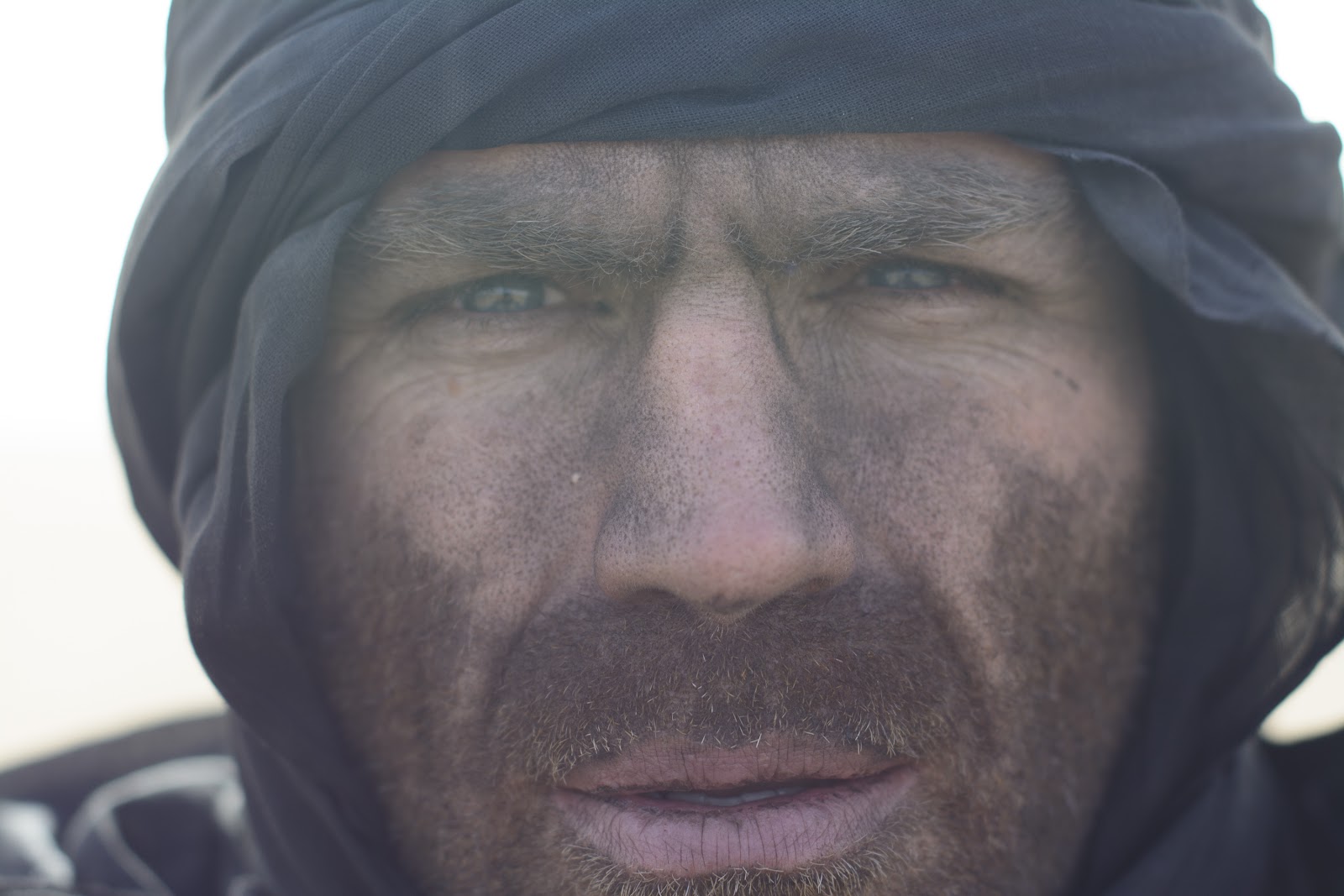